- July 18, 2011
Heart Smart Garlic Naan Bread is a delicious part of a diet when made with whole wheat. 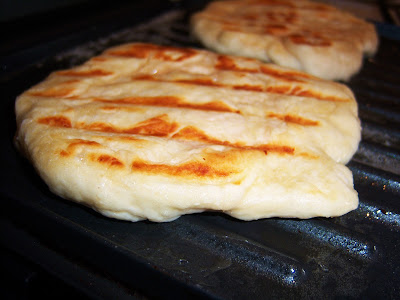 A grain is "whole" when the entire grain seed is retained: the bran, germ and the endosperm. The bran and germ components are rich in fiber, vitamins, minerals, antioxidants, and healthy fats. These are the parts removed in the refining process, leaving behind the energy-dense but nutrient-poor endosperm portion of the grain. Examples of whole-grain foods include wild rice, popcorn, oatmeal, brown rice, barley, wheat berries and flours such as whole wheat.

In addition to protecting against cardiovascular disease, which accounts for one-third of deaths worldwide, there is evidence that whole grains also protect against diabetes and other chronic conditions.

In a large bowl, combine the flour, garlic powder, and salt. Make a well in the center and add the yeast mixture, oil, and yogurt.

Knead together for 3 minutes, adding more flour as needed. I used an industrial Kitchenaid mixer. Place dough in oil sprayed bowl and cover with plastic wrap, then a towel. Rest and rise for one hour.

You will need to punch down the risen dough then divide it into 6 balls. Roll each ball out on a floured surface until about 1/4 inch.

I use a George Foreman grill to bake mine. If using an oven, place in a hot oven of 400 degrees and bake 8 to 10 minutes on a baking pizza stone or in a cast iron pan.

Lolly's Sweet Treat said…
I have only had Naan once, sadly to say. However, this homemade version looks delicious!
8:29 AM

Greg said…
It has been a long time since I have had naan. Very simple recipe. Seems like flat breads get ignored in US. I am going to have to give this a try.
8:52 AM

Liz That Skinny Chick Can Bake said…
Oh, my family would love these! Great tip about the George Foreman grill~
10:28 AM

Viviane Bauquet Farre said…
Wonderfully comprehensive post. This bread is such a great accompaniment to so many foods. Thank you for the recipe!
11:06 AM

Kate@Diethood said…
nom nom nom! Naan bread is so tasty, but add the garlic to it and it is crazy-delicious!!
2:53 PM

Shelby said…
This is one Indian food that Grumpy likes. lol. Nevermind it taste best dipped in curry. ;)
6:21 PM

Joanne said…
Naan. I love it but so rarely buy it. Can't understand why. I'll def. have to try this recipe. It looks healthy and I know it would be good.
7:26 PM

Anonymous said…
I love naan and you've made this SO easy! I think I'll be making some very, very soon!
12:43 AM

Georgia Pellegrini said…
I've always wondered about making Naan! Yours looks so good, maybe I'll finally do it!
8:59 AM

Candace said…
We made naan with pizza dough this week; but, I love that you've made it from scratch AND that it's healthy. It looks delicious! I can't wait to try it.
8:12 AM

redkathy said…
Hi Claudia, Love this bread! Red took the foreman grill to college so I guess I'll have to settle for the stone. Bet they would be good grilled outside too. With the summer heat, might just try that method.
10:14 PM

Elisabeth said…
Wow, I love this naan bread the way it turned out for you, Claudia. So tasty and delicious. I have a cast iron grill that would be lovely to grill it on.
Thanks for sharing yet, another wonderful recipe!
xoxo
7:29 PM

Dave at eRecipecards.com said…
Such a great message... Hope you take the following to heart and make us a habit...


Greetings. This is my first time on your blog, but you have a terrific one. I am always on the look out for new blogs, new ideas. I especially appreciate all the details you do, so many photos makes it seem like anyone can replicate the recipe!

It is a tool for bloggers to see and to be seen. Your posts would fit in perfectly.

in addition, all photos, recipe titles as well as your blog name would link directly back to your blog. Thus giving you new attention and potentially new readers.

Or, if you just want to take a look at a lot of fellow food bloggers all in one place. A great learning experience to get ideas about how to establish your own blogging voice!


Please take a look. If you have any ideas or questions, please do not hesitate to write

Unknown said…
Love it! I have some agave nectar in my cupboard, I'm making this over the weekend.
9:35 PM 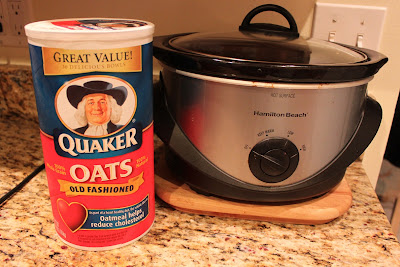 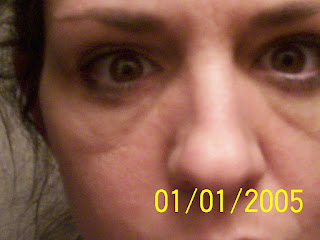 Pamela Ward has been battling a life long illness, named different by many different doctors. Finally a diagnosis years later, shocking to find out it was Lyme Disease. Thank you to Pamela to tell her story in her mission to help others  to under go tests to find out if this is what is causing their symptoms. It's not in your head! Her mission is to help misdiagnosed situations that may lead to the very same thing. After years of tests and false diagnosis Pamela has finally got results of Lyme disease and is hoping to help others get the help they need with her message. Thank you Pamela for your generosity to help others. A LIFELONG BATTLE OF LYME AND GRAVES DISEASE